Hey there my Frothy Friends,

Lately I've been consumed with an old passion of mine which may stick out like a sore thumb from my more glam pop culture obsessions - I love antenna TV reception. Long story short, ever since I was a kid, I loved hooking up antennas to TVs and seeing what stations I could receive. (And the further away the station, the more exciting it was to me!) So I've started up a new blog to document the stations I've been receiving in my quest to perfect my digital TV station reception as the U.S. gets closer to ending analog broadcasting. The new blog is called TV Garth, and it's here:

http://tvgarth.blogspot.com/
But the main reason I was writing this post was to rant about this terrible bizarre movie I caught while "antenna surfing". I pick up a channel from Buffalo (7-2 WNGS) which is an affiliate of "This TV". Basically "This TV" is a network that recycles and broadcasts old movies and TV shows from the MGM library. So today I stumbled upon the film "Blow Out" starring John Travolta and John Lithgow. Before capturing hearts as a loveable alien in "3rd Rock From The Sun", he was playing a patriotic strangler (???) who seemed to target women who looked like the early 1980s version of what studio execs thought a hooker should look like. Gigantic overdone makeup, bouncing curly hair, and a GIANT fur coat that would almost cause the ladies in question to stumble and hurt themselves before John Lithgow could even come to strangle them. So I flip by once, see John Lithgow strangle one such dame, and they roll down a construction site where he lays on top and pulls out a screwdriver (???) to finish the job as he looks up at some advertisement for a "Liberty Day" parade or something. Blaaaah. So I quickly changed the channel, cause it was looking gross. But later I came back to it and saw him dragging another 80s-hookerette up through the actual "Liberty Day" parade and NO ONE noticed! She's being dragged up some stairs to some kind of building top, but kicks away Lithgow long enough to scream for Travolta's help. Travolta races up the stairs to the strangle-zone and gets there in time to stab Lithgow with his own screwdriver-torture-thing-a-majig, but finds the girl dead! That's right - dead - with fireworks ironically going off in the sky behind the unlucky pair in celebration as John Travolta's lip quivers. Shouldn't she just look dead, then start coughing slightly and embrace Travolta for getting there just in time to save her? She would then renounce her "profession", marry him, they go buy a dog and live happily ever after? Nope, not in This movie. Near the end it appears that Travolta listens to the tapes of the women being tortured (???) Confusion, thy name is Blow Out. Just when I was ready to give up on This TV, the throw on a movie called "Dead Connection." Shirtless men in boxing rings and a special appearance by the GIGANTIC hair of Lisa Bonet!!! Now that's a Frothy Pop Treat, and I couldn't resist taking a picture of This: 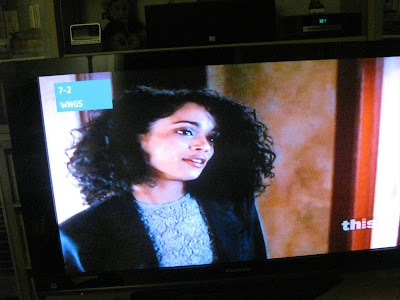