It was around this time last year that I fell head over heels again for legendary 80’s cartoon Jem! (I loved the show as a kid growing up, fell back in love when the DVDs were released in 2004, then fell in love again in early 2009 when I discovered the “lost” Stingers episodes.) I then became interested in anything that was sung by Britta Phillips, who provided the singing voice of Jem.

This post is my attempt to mash up the fictional events of the Jem cartoon with Britta’s real life music career. (Or rather my own fictional take on the “later” Jem years using Britta’s music as an idea for what might have happened!) The overlapping similarities may surprise you! Pretend that Britta Phillips is the alter ego for Jem and this will all make more sense!

Picture it – New Year’s Eve 1989 at the Starlight mansion. Jem is emboldened by the new decade that’s just around the corner and wants to have a huge celebration. Just as she gets ready to open up a bottle of champagne with Rio, one of the Starlight girls rushes by and causes the bottle to fly out of her hands! As fate would have it, the champagne explodes all over Synergy and causes her to short circuit! (Not even Ally Sheedy can help at this point!) At once Rio sees Jem’s true identity exposed, and this leads to a nasty breakup with her.

In the days that follow, Aja can’t repair the supercomputer, and the girls freak out on Jem for potentially destroying their meal ticket with the champagne incident. The group suddenly faces the risk of a very real breakup! 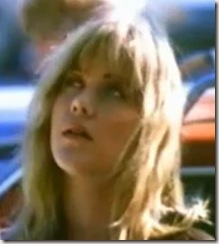 Jem complains that it’s her voice that sells the group, not the holograms. In retaliation, Kimber remembers her one solo hit with Stormer and decides to go solo again! Fed up, Shana moves to Australia where K Mart has offered to stock a line of her clothing. Meanwhile, Aja is left tying up the loose ends of the Starlight house and devotes herself to saving children around the world. (Her commercials for Feed The Children air late at night during questionable programming blocks.) Raya is disappointed with all of them and goes home to her family.

Feeling depressed, Jem (Britta) cuts her famous locks short and dyes them black. “No more holograms for me, I should have done this years earlier!” she reportedly says at the time. She then moves out of the Starlight mansion into a New York apartment where she happens to meet a scruffy young man named Jody Porter. With Rio out of the picture, and Kimber’s control of the songwriting gone, Jem finally finds someone to help her express her feelings! Wanting no connection to her former Glamor, Glitter, Fashion and Fame, she calls her new group with Jody The Belltower. 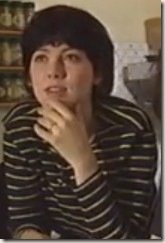 Their album Popdropper arrives (named as such because Jem was dropping the pop she'd made famous with the Holograms.) Click here for a link to hear the album! If you listen carefully, there are definitely some bones to pick with former associates!

In One Dimensional, she relates the struggles of her dual identity and how she still loves Rio:

I got ahead of my time [you know, the hologram technology]
I had to take a day off of the calendar page [she was tired!]
Walked to the river bed
where I had daisy chains of laughter perfected,

protecting your point of view [Rio didn’t know for how long?]
I am one dimensional
after you
I'll be calling after you [she still wants Rio!]

In Outshine the Sun, Jem is clearly still bitter about her original group’s breakup:

Outshine the sun, everyone [her retort to their solo attempts]

Walking the long way back
Through pages of history [contracts and business shenanigans?]
caught in your hand made trap
That's no way to be

Once you have had a taste [success with Misfits and Stingers]
You will be laid to waste…..

Let me shake your hand
Cause you're just like all the rest
And you think that you're the best [Jem’s done with Eric here!]

Jem saves the emotional whallop for the last track, when she tackles Everytime – another ode to her past with Rio, and his angry reactions to her dual identity:

Even if I had to confess
to tell you were right
Don't wanna speak in words
to confuse you, despite what I know

The Belltower didn’t last too long, but it gave Jem the confidence to realize she could exist without the Holograms. Around this time, Kimber signed a deal and released a dance album entitled K Is For Kimber. While it did well on the club charts, it failed to propel Kimber to her former Jem-driven success. To top it off, legendary producer Shep Pettibone turned down Kimber’s request to oversee her second album, as he opted to work with another redhead – Cathy Dennis!

A few years later it was 1996 and the Spice Girls were the hottest thing to burst onto the scene. Shocked at what she saw as blatant capitalization on her former band’s glory, Jem joined up with a new group: Ultrababyfat! This time, to avoid media critiques of being a spotlight hog, she agreed to play bass and sing backup only. 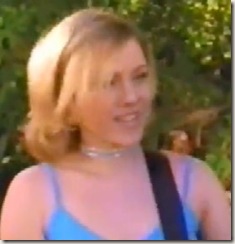 But Jem made sure she had input on the group’s first video Twist, as Ultrababyfat donned wigs and colourful outfits in what appeared to be a wink at her 80’s heyday with the Holograms:

Jem changed directions again in the early 2000s, finding a musical and romantic soulmate in Dean Wareham. The pair created lovely 60s styled pop as Dean & Britta, but she couldn’t resist belting out the chorus of You Turned My Head Around in her old Hologram fashion:

Later in the decade Jem (Britta) decided to help the campaign for President Elect Obama. Now at peace with her musical journey, and wanting to show her support for Obama’s promise of “change”, Jem reunited with the Holograms to release “We Can Change It – Remix Feat. Akon.” The 20th anniversary remix also coincided with a release of Jem & The Holograms: Greatest Hits. A reunion tour quickly followed. Much like the Spice Girls reunion tour, each member of the Holograms had a “spotlight” to showcase their solo efforts in the middle of the show. Jem came out and sang You Turned My Head Around with special guest Dean Wareham. Kimber came out and sang I’m Ok with special guest Stormer from the Misfits. (Stormer was also promoting her autobiography After The Storm: My Life As A Misfit.) Shana didn’t even sing, she just strutted around to a pumped up remix of Roxette’s The Look and modeled some of her own fashion designs. Raya then came out and did a fab cover of Madonna’s La Isla Bonita. Meanwhile, Aja broke down several times during her cover of John Lennon’s Imagine, in which the video screens showcased her childrens charities and the many kids that she’s helped over the years.

The Holograms once again felt good playing together, and promised to reunite for a new project in the near future!

And that, my Frothy friends, is your FICTIONAL tale of what might have happened to Jem & The Holograms in the 1990s-2000s, using the real life career of Britta Phillips to fill in the gaps!

This is Garth, signing off, one Frothy Pop Treat at a time!
Posted by Garth J at 12:00 AM 3 comments: