Out of the groove with Madonna

I've been a Madonna fan since I was a wee young thing growing up in the 1980s. (One of my earliest memories is crying in a downtown Toronto record store because my parents wouldn't buy me all the Madonna 12" singles they had.) She's been there for all my major life moments and one of my closest friends said she was the one who gave him the strength to be proud of being gay. Her music has always spoken to me, inspired me and given me life when I've felt awful.

But nowadays I find myself rolling my eyes at her outbursts. Her latest statements on the leaked recordings from her upcoming album seem surprisingly out of touch for such a formidable businesswoman. It's 2014 - music leaks have happened to everyone for a long time, albums don't sell the way they used to, and any artist worth their salt needs to have contingency plans in place for situations like this. If Beyoncé could secretly record an entire album with accompanying videos and not have anything leak, maybe Madonna needs a new team. But what really gets to me is the negative tone of Madonna's statements and the way it sometimes feels like a slap towards the fans. After all, they're the ones who crave and relish her material and spend quite a bit of their hard earned money on her.

I'm not condoning the leaks, but as a fan, I LOVE to hear how Madonna's artistic process works. I buy all the officially released material, attend the very pricey tours and would gladly pay for "rarities" if she made them available. I very much consider demos and unreleased songs part of the tapestry that enhances my appreciation of her work. Her songs have leaked for a very long time (all the way back to Frozen) but now she's lashing out with a vitriol I've never seen. (One fan was even arrested a few years back after being accused of leaking an MDNA track.) These days, once an album leaks there's no way to put the genie back in the bottle, and people will be curious and listening.

Instead of lashing out in anger, Madonna could have called on her cheeky humour, brassy wit and gone in a whole other direction. Imagine if she wrote something like:


The songs that leaked are unfinished demos and I'd prefer all my loyal fans to be patient for the official release. But for those of you who chose to be "Rebels" and listen early, please find it in your "Heart" to donate $5 to [insert charity here] to repent for your sins! Next time I'll spank you! xoxo Madonna
Maybe that's a little too punny or cutesy, but with the sheer amount of followers and intense fans that follow her, she could probably get people to cough up some decent dough for a good cause. Instead we get negativity galore.

This is the same woman who has in recent years trashed Lady Gaga for allegedly ripping her off (something Madonna would never do), complained about "unfinished" demos being heard but released a career defining greatest hits CD with numerous errors, and charged exorbitant prices for her tours. (I've had better seats for Cher, Kylie Minogue and the Spice Girls reunion tour at a fraction of the cost.) My personal favourites were all the "special edition" CDs priced 3-5 times higher than the regular editions with nothing but slightly fancier packaging. (Ray of Light had a shiny slipcover and Hard Candy came with a bag of mints...) Sometimes it feels jarring to balance what I love about Madonna's music with her pithy attitude and cash grabs that take advantage of the loyalists. Especially when those commercially available products often times seem devoid of content worth the costs.

So, I'll go out on a limb and suggest the leaks sometimes help fans like myself feel like we're getting our money's worth because we support her career in so many other way$. (Don't even get me started on people who paid $250 to watch one of Madonna's workout classes when she opened a Hard Candy gym in Toronto!) Most of us will buy the new CD and pay through the nose for the inevitable tour, but still want to hear the leaks because of our voracious appetite for Maddy material. I'd even go so far as to say certain leaks have benefitted Madonna. Back in 2006, DJ's Loo & Placido used a leaked acapella of Into The Groove and mashed it with Cassius' track Toop Toop. The results impressed Madge so much that she incorporated the remix into her 2008 Sticky & Sweet Tour. 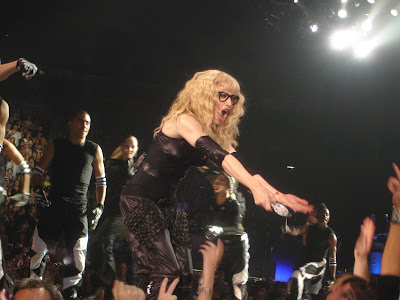 Again, I'm not condoning or saying it was right for this stuff to be leaked. I don't think we're entitled to them and understand Madonna has every right to be pissed and hurt about them being thrown out there. But once they've hit the net, they're essentially released to the world. I think Madonna should be flattered that her songs still merit this kind of attention and interest, despite being less polished versions than she wanted released. It makes me shake my head that Madonna couldn't try a more positive spin to this situation, because a woman with her savvy should be able to give us lemonade instead of sour lemons via Instagram.
Posted by Garth J at 1:43 AM

Fantastic read! I didn't know you were such a great writer.